Please make sure that “/” is writable by the web-server. [Magento 2.4 Sitemap]

Back-end of Magento 2.4.4 shows “Please make sure that “/” is writable by the web-server.”

Here attached the details of my Equipment Set Up:

Setup follow direction on How to install Magento 2.4 and build a web server .

I already updated Magento system from 2.4.0 to 2.4.4, met the same problem at Can't setup sitemap but I can’t solve it by running the commands sudo chown magento:www-data /var/www/html and sudo chmod 775 /var/www/html as the superuser “god” from within any directory. 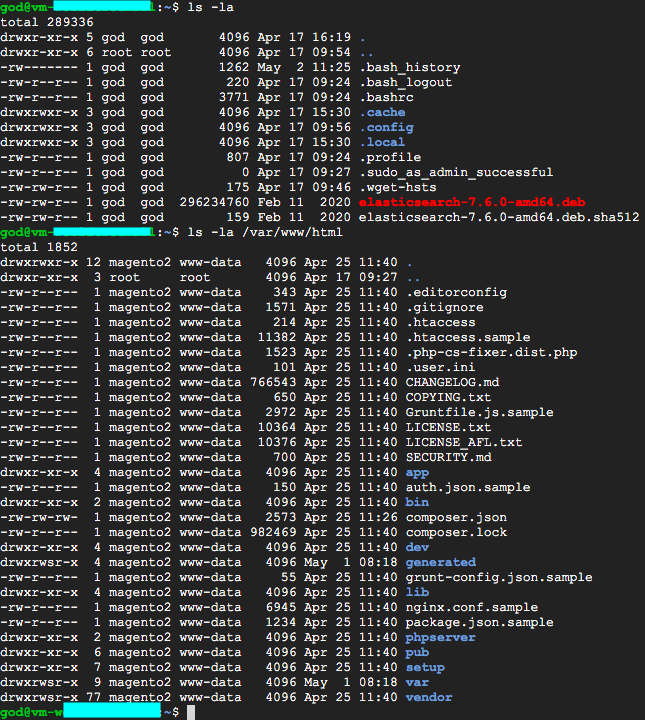 And I found that the “elasticsearch-7.6.0-amd64.deb” shows in red color when I was logging in as superuser “god”.

Is this folder abnormally large or has an error occurred? Please let me know the solution of setting up the sitemap and turn the folder “elasticsearch-7.6.0-amd64.deb” to normal for stable operation in the further.

Thank you very much! 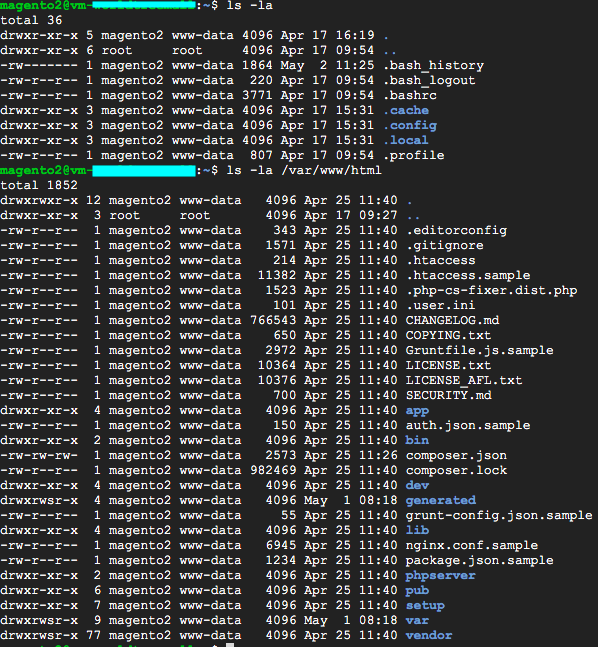 And it’s still the same situation. 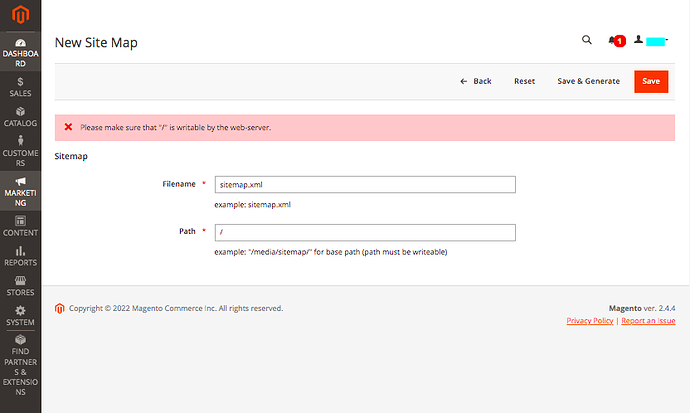 Elasticsearch files
Firstly, let’s address the elasticsearch files. Those are only temporary files that you would have downloaded in order to install Elasticsearch. This is why I recommended downloading the files to your “My Documents” directory (e.g. /home/god/). As they’re only used to installing elasticsearch, you don’t need them anymore. So, just delete them.

Sitemap
As you’ve clearly identified, magento2 user has appropriate permissions to write to the /var/www/html/ Directory

However, you should ask yourself:

"But who is trying to write to the /var/www/html/ Directory?"

If memory serves, crontab is responsible for actually creating the sitemap files. Therefore, in your case you should check that you have setup crontab under the correct user. Because if you accidently setup crontab up as god user (for example), then it’s god user trying to write the file, not magento2 user.

How to diagnose and fix Ownerships and Permission issues

How to fix Cron Tasks
Another common mistake I see are cron tasks being created under the wrong user. So, during the installation process of Magento 2.3 you run a command that sets up cron tasks. To give you an example, if I were to set these cron tasks under the “craig” user rather than the “magento” user then every time a cron tasks was executed then it would either result in:

So, I’ve created a scenario where that is exactly what has happened.

First, I want to check what cron tasks are setup under each user. This is something that’s best done as a superuser. So, once again I’ll switch to the superuser… Now that I’m logged back in I’ll run:

Next I’ll run the same command without “-u magento” at the end:

This displays the cron tasks for the user I’m logged in as. And as you can see, there are Magento tasks setup that shouldn’t be there.

Now we know the issue for sure. All we have to do is delete the cron tasks from the superuser and install them under magento.

To delete the tasks that I setup under the “craig” user I simply type:

If you’ve never entered this command in before, you’ll be asked what text editor you want to use. Just press “2” to use the nano text editor.

With the file now open, removing the tasks are as simple as holding down the Delete Key… Once finished press Ctrl+X to exit and “Y” and Enter to save.

And running the cron installation command to reinstall the cron tasks as the correct user, which is done with:

Remember, we can verify this is installed under the “magento” user now by running:

Which shows all of the tasks setup under the user that I’m currently logged in as - Which is the “magento” user. And there’s the output we’d expect to see

Hi Craig, thank you so much for finest efficiency of teaching.

Unfortunately I am still a beginner with less experience

. The problem is still here.

I found that I might set a cron tasks by root user.
I deleted that cron tasks and emptied all users’ cron tasks with crontab -r, run sudo chown -R magento:www-data /var/www/html/ && sudo chmod 775 /var/www/html by “god” .

Finally, run bin/magento cron:install without any cron tasks by “magento2” . There is still the same situation we are facing with.

May I know more about what steps I did wrong or what should I do at the next step please?

Here is the content of cron task by root user used to write for renew ssl certificate automatically last time (which is deleted):

okay Mr. Craig, I found the solution by tests and I am still wondering if this is the correct way to solve it. Please reply me to let general know about it. @digitalstartup

This Step 0 is optional because I can’t make Step 1 successfully when the owner of /var/www/html is user “magento2” which is not superuser. 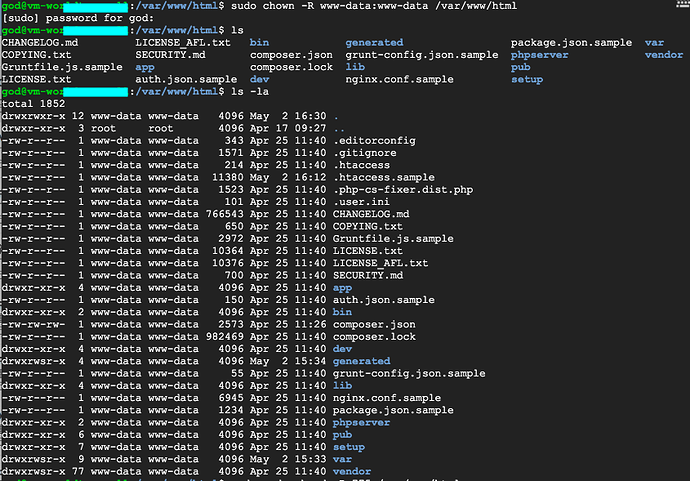 as the “superuser” from within any directory first, -R is missing at the below link, I think it’s quite important in this case:

I’m an idiot. It was late when I read your post last night. I miss read the image. The folder is fine as it is. It’s the Permissions which needs changing. Try running the below command as the “superuser” from within any directory: sudo chmod 775 /var/www/html Explanation Your /var/www/html folder is currently set to 755. This means that magento user can create folders/files but not www-data. When Magento creates new files, they are created as www-data. Therefore, it doesn’t have the permissi…

The documents’ name turn Green if they changed into 775! 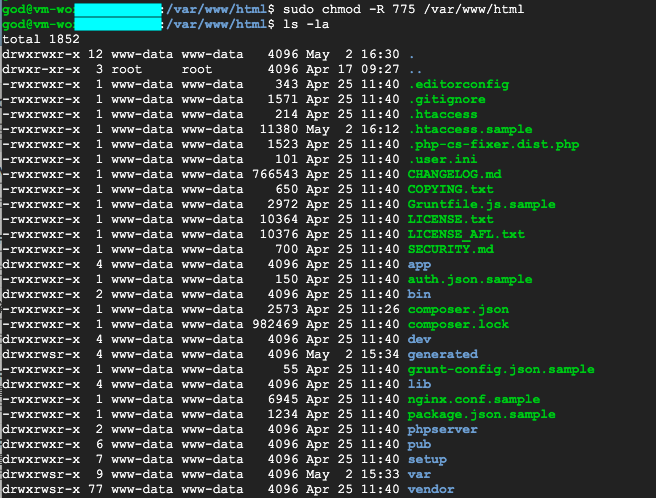 Step 2.
Final Step, do remember to change the owner of /var/www/html back to “magento2” by command 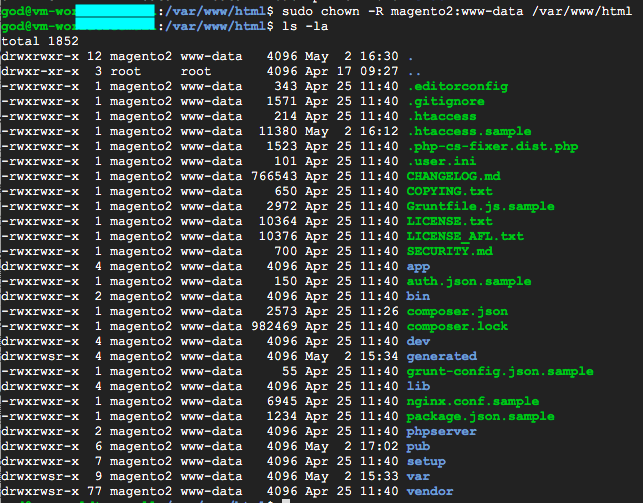 Notice (magento2 = username of Magento databases’ owner which I chose at the beginning we set up our Magento), it equals to character of user “magento” in Ubuntu Server at How to install Magento 2.4 and build a web server 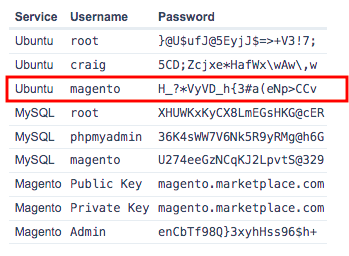 Good work on solving your issue. Nice to see it was as simple as a Permissions/Ownership problem rather than anything too wild. Your methodology to solve the issue was sound.

My only comment, would be to set the appropriate chmod permissions back, as you’ve set everything to 755. Just run the below as the filesystem owner (e.g. magento2) form within /var/www/html/

If I understand your setup correctly, run the following commands. But make sure:

Ref: How to diagnose and fix Ownerships and Permission issues

It’s all fine now after running the following command as “god” .

Then run the following command as “magento2”, no need sudo cause this character at How to install Magento 2.4 and build a web server can’t run sudo command
(“Operation not permitted” comes out if run this as “god”)

No more “Operation not permitted” comes out.

This topic was automatically closed 2 days after the last reply. New replies are no longer allowed.